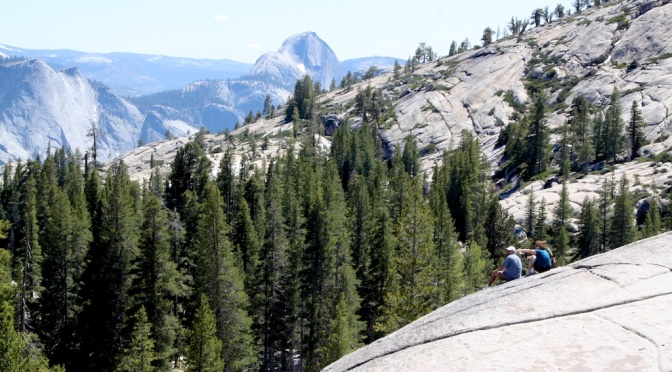 One of the first national parks I visited shortly after moving to the Bay Area was Yosemite. Five of us crammed into a hard-sided cabin and enjoyed the park in winter. Since then I have been back many times: sleeping variously in the Ahwanee, Camp Curry, the Yosemite Lodge, Wawona Hotel, various campgrounds and most memorably on a granite slab under the stars on the banks of the Tulumne River high in the meadows. I’ve hiked and biked and skated and skied and snowshoed and played in the river.  I’ve visited in late summer when the falls are a dusty trickle, in spring when they blast you with spray a mile away, in autumn when the leaves turn golden, and in the winter when the sequoia are blanketed with thick snow. I love this park: its truly magical.

Since Yosemite became California’s first state park in 1864 it has also been at the center of the debate about how we manage park land to ensure preservation while allowing continued use. In fact, the state did such a lousy job at protecting the valley and mariposa grove from damage from commercialization, grazing, logging and and un-crontrolled use that the Federal Government took it back in 1890. In many ways, the current debate about the future of the valley and the meadows, playing out through the recently released Merced Wild and Scenic River plan rehashes familiar territory.

The good news is we are now focused on restoring the damage of the past by removing volunteer trails that threaten meadows, the rip-rap that impairs the natural flow of the river, and pulling back campsites from the rivers edge.  But I fear that in some ways we are going to0 far in removing the amenities people enjoy when they come to the park. Does it serve the park in the long-run to have fewer people visiting the backcountry and staying in the High Sierra camps? What if visitors can no longer rents bikes to enjoy a circuit of the valley? Or take a horseback ride for an afternoon? Or purchase drawing supplies to make a sketch of the towering granite domes? Or miss their one opportunity to float the Merced River as they fail to secure a permit in advance?  My personal feeling is that these changes have a marginal impact on the natural resource and have a major impact on the visitors enjoyment of the park. And over time, that risks eroding support for the park and societies understanding of wilderness is.

The myth of wilderness is just that. Wilderness is a human construct that has always included a place for people. And national parks by there very nature are places set aside by people for the enjoyment of people. I believe we need to find ways of inviting people in and making their visits engaging and informative. And that means providing them simple amenities so they can enjoy the park in a way they chose. This doesn’t mean opening up the backcountry to all comers — Yosemite is vast and will always have places beyond the reach of 99.9% of visitors. But to deny the 99.9% the ability to cycle the valley or float the Merced or perhaps get a coveted lottery spot for a High Sierra Camp is simply short sighted. Yosemite has many examples whereby we’ve protected resources and provided enhanced public use — witness the renovations to Yosemite Falls, Glacier Point, and Olmsted Point — interestingly all funded through a public-private partnership with the Yosemite Conservancy. It’s time to take this energy and get creative and forge a Yosemite that showcases both excellence in resource protection and public use.

One thought on “Yosemite Wild?”